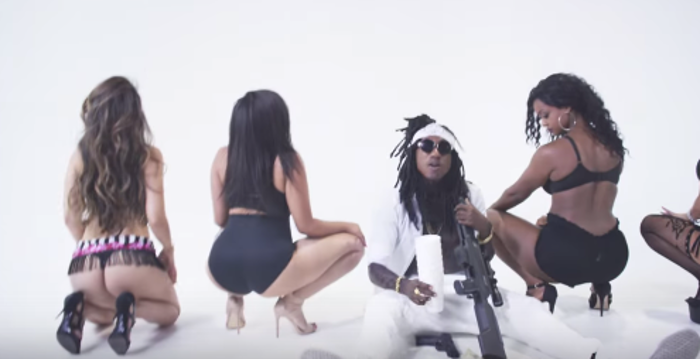 No words,’ a skit on Hopsin’s latest album Pound Syndrome, has become a music video.

“Man today’s rap fucking sucks bad, I don’t care what anybody says. These fools ain’t spitting no type of dope shit. But that’s not even the bad part, they’re not even saying words anymore. They just got a hard ass fucking beat to trick dumb ass like you to make you think you like the shit,” Hopsin begins the short track with The visuals feature guns, girls and a whole lot of Styrofoam.  But no comprehensible bars.

Think about it whats wrong with the game today is that all of the artists are talking about the same thing over and over and people buy it because it has a good beat that’s all. The true Hip Hop artists are underground because this generation doesn’t want to hear about real life or songs that offer true advice based on experiences. Can you imagine how ignorant a person who listens to this crap must truly feel that they are not listening to true hip hop? Em not here to spare anyone’s feelings but I am here to give you the honest truth. I know for  a fact that none of these bullshit artists can win a battle with the true hip hop artists who actually take time to create their craft while keeping the hip hop culture alive. Then you wonder why kids in the community continue to throw their lives away when their  mentors are spitting bullshit about the “COCO” .  Take a long hard thought and think about it. Take a listen to some underground hip hop or even music from the past the difference is that today’s artists have a strong motive of feeding you poison just to make some money. Doesn’t that poison the art of hip hop?

Hip Hop is largely based on one genre which is hiphop/rap but theirs different kinds of hip hop but its not widely noted to have multiple genres. Even the fashion of today reflects the garbage that is being played all around the clock today. Men with skirts, Leggings whats next hip hop bras? You got east coast artists conforming to creating trap songs and music from the south but they live in the east where “Hip Hop” was created. If you can’t see how easily people have become brainwashed by just listening to a beat then you have to be deaf, dumb and blind at the same time. I respect the true artists out there who actually make hip hop. In the commercial game there aren’t too many but I can say Eminem, Kendrick lamar, Logic come to mind who actually take time to give us good music. What do you think?

Get tickets to see Hopsin on tour: http://myfunkvolume.com/tour