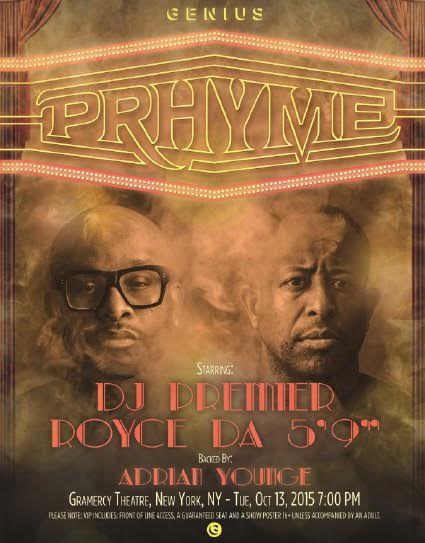 Initially included as a scaled down version on the official movie soundtrack for Southpaw, PRhyme (Royce Da 5’9” & DJ Premier) unleash the full beast version of “Mode,” which also serves as the first preview from the forthcoming deluxe edition release of their debut self-titled collaborative project.  “Mode” finds Royce and Logic going bar for bar for a 7-minute plus exercise of verbal pugilism.  The PRhyme deluxe edition will feature appearances from Logic, Joey Bada$$, MF Doom, Phonte and Black Thought.

In addition to the forthcoming PRhyme deluxe album, Royce and Preemo will be headlining an event for CMJ at the Gramercy Theatre on October 13th, where they will be backed up by Adrian Younge and his band Venice Dawn; the first such NYC performance of Venice Dawn.