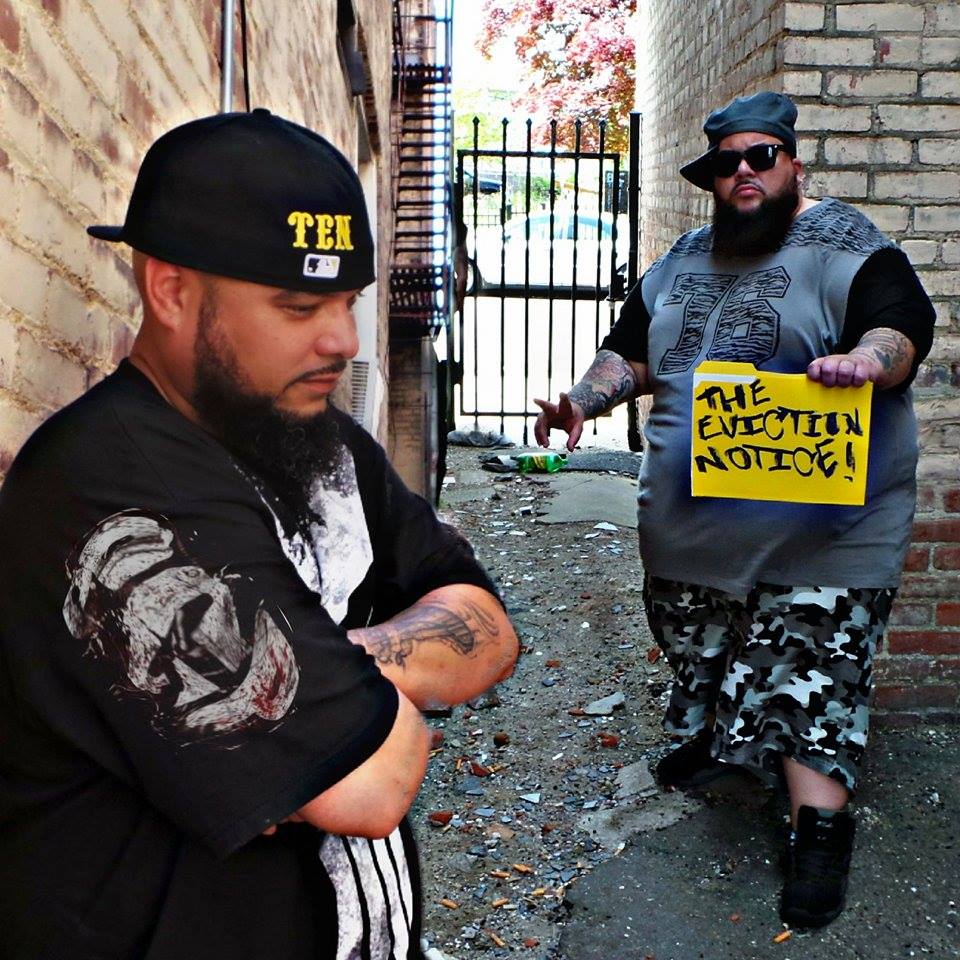 [TUHH] Tell us about yourself.  Where are you from? What kind of music you create? How did you get started in music?

[SKAMPOE] PEACE! Im SkamPoe aka JehovAllah Daprophett aka King Hippoe but ya can just call me Poe! I’m a Puerto Rican emcee. Born n raised in Bridgeport CT with roots deep in the island of death (PR). My style of raps is pretty much to stay true to the culture and that Timberland era of Hip Hop. I Been writing raps since 2006. My cousin/rhyme partner (Jigsaw45) called me one Friday and told me to write a verse to any beat off a cd he gave me with instrumentals on it. Because some guy he worked with had a home studio and he was scheduled to have a recording session with his brother in-law (ToneFOX) the next day. These 2 had a rap group called TTT (Team Toe Tag). So before that I’ve never written a full 16 bar rap verse or had any concept of song structure or nothing. So i wrote and recorded over the RZA’s Tragedy instrumental and my peoples thought i did good so Ever since then I just got that bug,  I kept on writing and elevating my skills.  Now I have over 33 solo albums available for download in association with the label Darkstarz Records.

[JIGSAW] I was born in Bridgeport Connecticut but when I was 8 and when I graduated high school I spent 3 or 4 years back and forth between CT and Quebradillas, Puerto Rico so I’m familiar with the different lifestyles of living in the tri-state and on the island. I been into all kinds of music but my true love is hip hop. I love all different styles of hip hop from the hardcore to the mind elevation to even the party records from the golden era. I used to just write rhymes here and there since I was 17 pretty much all the way up to now. One of my closest friends also one of the founding fathers of PCP Will Vega who also happens to be featuring on a bonus cut on T.E.N. used to write verses with me in our teens. But in my mid 20s is when I met a dude at one of my old jobs that had  studio equipment so I called up Skampoe and said, “yo come with me to the studio this weekend and bring a couple verses.” as I said before, PCP has been around since 95 but since that moment when I called Skampoe up, the rest is history. As far as how I put tracks together…I try and dabble in different chambers of the music but somehow I come back around to the hardcore battle style spittin.

[SKAMPOE]We started off as poison clan the Graff crew, then poison clan productions.  Pretty much cuz we all grew up being huge fans of Wu Tang Clan. But, based on the trials and tribulations of life we ended up calling the rap chapter of PCP, Poverty Crime & Pain Pistol Clappin ProRicans Powerful Crime Partners Park City Prophets Pop Corn Playaz (Poe chuckles). I can’t say this enough-there are other members who are practically family that are associated or part of PCP since day one so we stay reppin for them as well.

[SKAMPOE] I don’t fuck with radio rap niggaz so I love creating my own music so I don’t have to ever tune in to them bull shit “Hip Hop” stations playing what ever the record executives paid to be spun. I love to create i love to write, as cliché as it may sound I lived and been thru way more shit than what your favorite rapper raps about. So i put pieces of my life into every track i create, that plus a sick ass imagination the out comes is creative, at least I like to think so.

Truth be told, we haven’t performed live yet. me personally, I got a little bit of stage fright, lol. I think I’m just worried that I’m going to suck at it. as far as creating the music, I just love doing what the fuck I feel like doing over a beat and people tend to gravitate well toward it. Especially those that Miss lyricism in the art form. I tried to break out of my signature flow and sound here and there to be a little more diverse but, like I was saying before, I tend to come back around and spit some shit that’ll make motherfuckers scratch their head before they write a verse or dare challenge the god. In my case honestly…diss records and battles between emcees is what inspired me to write.

[SKAMPOE]from my life, past present and future. Every thing around my physical self is inspiration to me. Every one I’ve ever came in contact with all play a part in what I create. good or bad.

My inspiration comes from the generations before me that I looked up to…You know, when it was a must to be super lyrical. I know it’s becoming redundant to speak on The Wackness that is today’s rap music but none of these new artists in the last 10 to 15 years are worthy of being considered one of the greatest of anything let alone being inspiring to me at all.I do however find inspiration in my partner in rhyme skampoe and my DSR clan. everybody’s super talented and we all keep each other on our toes. It’s dope when your greatest competition are the people you work with most.

[TUHH]What can we expect from this new installment in the PCP catalog?

There’s a whole lot more chemistry from both of us on this project. I mean obviously you can hear the progression from the first to the most recent PCP album. all the predecessors had dope ass records without a doubt but it’s pretty obvious we learned as we went along with each album as a group or duo if you want to call it that. The thing that makes this one so monstrous is that we added our own separate but cohesive Vision from putting solo albums together individually and taking both those chemistry’s and smashing them together to create the gamma explosion that is the eviction notice. you can literally hear me catering to Skampoe style and him to my style based on the feel of each track. not to mention that all the tracks fit the scheme of the album title.

[TUHH]Can you speak a little more on new solo albums?

Its called the rules of engagement and if I tell you anymore I’ll have to kill you, haha! If you’re well aware of the beast that I am on the mic then you’ll know what to expect from the next jigsaw Lp.

[TUHH] What was the theme or thoughts in creating “The Eviction Notice” ?

What is the album about?

Skampoe spit a line years ago saying, ” if hip hop was the building I’d be the most hated on tenant”. That line pertained to us so much that it became one of our many calling cards. So with that being said, I said we gotta name one of our albums the eviction notice one day. Pretty much kicking everybody that don’t belong in the house of hip hop the fuck out!

word up, but it has many other meanings like at one point other rival emcees wanted to evict us out this hiphop building but we showed and proved, we still standing while most of those guys are less than faint memories. Regardless of rap HIP HOP is the culture we was born in.

[TUHH] What are your work methods? How do you guys work together when you make music?

[JIGSAW] I hear a beat that sounds like he needs to be on it and vice versa. it’s a dope chemistry really…it’s almost like it happens on accident.

[SKAMPOE]indeed, our chemistry, the bond, the blood. we are blood related,

this isnt something a record executive put together and called it a rap group.

[TUHH] What is your favorite P.C.P. album?

[JIGSAW]All of them! when you listen to them in chronological order you can hear the development in our lyrics Style and mixing ability.

[SKAMPOE]yup, the growth. like i said, me personally, I aint wake up one day and said im gonna be a rapper now cuz all the cool kids are doing it.this abillity came to me as a gift, and with every album song or verse it shows how i loved the gift and been working on it trying to master it and add on to the greatness of this art form.

[TUHH] What is your favorite song on the eviction notice album?

[JIGSAW]I like all of them for different reasons but if I had to choose it would be the hard goodbye. what a perfect way to close an album!

[TUHH] Do you guys plan on performing songs from the album soon?

[JIGSAW]I got to get over my self-consciousness to spit in front of a crowd of people, lol. But I guess we’ll cross that bridge when we get to it.

[SKAMPOE]fuck that, this is the fucking digital age, facetime me and i’ll recite a verse for ya.

[TUHH] as artists who do you think you guys sound similar to?

[JIGSAW]We sound similar to PCP, haha! Some of my people have told me that we remind them of the early Mobb Deep, EPMD, we’ve even been told that we remind them of Wu Tang. Those are huge shoes to fill but definitely a big compliment. But to fully answer your question, and no disrespect to them because without them there wouldn’t be us. we don’t sound like nobody and don’t nobody sound like us.