from the album “Whole Food” produced by Gensu Dean and featuring vocals by Denmark Vessey. Directed by Rodolfo Duran.http://tinyurl.com/zv7985l

About the album:
If the words Whole Food remind you of yoga pants and hemp bracelets in a parking lot overrun by yuppies, don’t worry–you’ve come to the right place. This full-length collaboration between Gensu Dean and Denmark Vessey comes packed with all the vitamins and nutrients you could possibly need without any of the frivolous packaging. The pair’s debut as a duo on Mello Music Group imagines mugshot spreads in Newsweek and blood dripping down starched white aprons, and there are no $6 cappuccinos in sight.

Over the past year, Vessey had developed into one of the most
buzzed-about rappers in the underground circuit. The Detroit native
dropped one of 2015’s most critically acclaimed records with Martin
Lucid Dream, a heady, pointed treatise on the state of America’s
shared psychosis. On Whole Food, he expands his purview to encompass the whole human body, from the biscuits and gravy weighing down your stomach to bullet wounds in your abdomen. And he does it all with empathy, wit, and supreme technical skill. 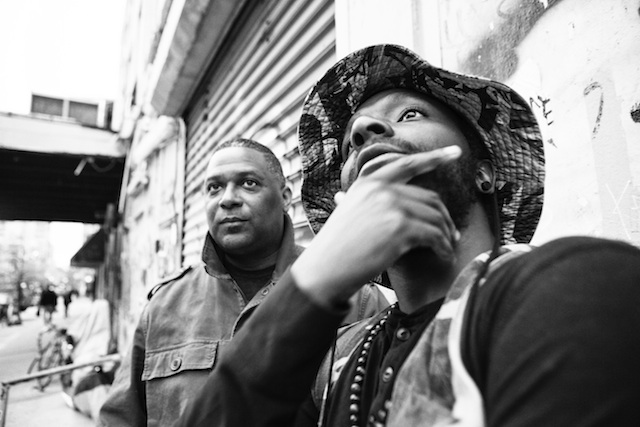 For his part, Dean continues to be one of hip-hop’s best kept secrets,
a masterful sample chopper whose attention to detail makes him one of the See “Saturday,” which feels like a crew of preposterously talented percussionists squeezing one last jam session before heading out to the club. The Texas-bred producer makes the genre’s hallmark sounds feel fresh and reinvigorating.

This isn’t revivalism as we’ve come to know it–artists grasping for
an idealized version of the past that was suspended in amber. Instead
Gensu and Denmark embody the ethos of hip-hop’s golden ages, with all the off-the-cuff experimentation and unhinged creativity that defined those years. There are cardboard-ready breakbeats married to
Zapp-style vocoders and razor sharp bars on a song named for an emoji. For these two, authenticity is measured by the amount of truth you can pack onto wax.

Whole Food is nutrition for your mind and spirit, but it’s never
pedantic or preachy. Gensu and Denmark piece together one of the
loosest, most visceral records in recent memory, one that’s filled
with punishing bass lines, clever asides, and astute observation.