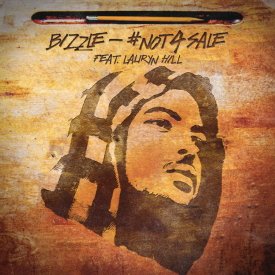 Bizzle is a Christian rapper from Los Angeles, who currently resides in Houston with a long track record of success.  His second studio LP, The Good Fight, (2013) debuted at #11 on Billboards charts and included production from Boi-1da and a guest feature from Pusha T and was nominated for Rap/Hip Hop Gosepl CD of The Year in 2014 (sharing a nomination with Lecrae).  In 2014, the faith-based emcee created quite a stir with his

response track to Macklemore & Lewis’ “Same Love” after the controversial wedding ceremony that was broadcast during the 56th Annual Grammy Awards; which has since resulted in close to 450K views on Youtube.

Bizzle is back with a striking visual for his new single, “#Not4sale,” featuring the powerful vocals of Mrs. Lauryn Hill, which is taken from his forthcoming album Surrender (where he will once again be joining forces with Boi-1da).

“Do you ever wonder why we have so many rapping drug dealers, killers, gangsters, pimps, etc. in hip hop? Meanwhile you would have to search VERY hard to find rapping teachers, attorneys, students, family men, etc. I’m sure this is done intentionally. Most argue that hip hop reflects the hood, but in the hood, the killers & dope boys are the minority. So how is it that you can listen to the radio and drugs, sex, violence is the majority? Hip hop is the most powerful culture in the world. In its conception, it gave a voice to a beaten down and oppressed people. The industry saw it coming and tried to shut it down. However, after realizing they couldn’t, they did the only thing left to do— take control of it. Take drug dealing for instance; we all know it destroys communities. In order to become a drug dealer, you have to at some point go into self preservation mode and say “Forget about this man’s/woman’s kids, my kids have to eat too.” And if you grew up in the hood like I did, you know that while most people use “feeding their children” as a righteous cause for destroying others; cats rarely do it for that reason. It’s always about ballin’, cars, clothes, women, jewelry, etc. and whatever else we can do simply to “stunt” on each other in a way that makes our less fortunate brothers and sisters feel inadequate to the degree that they will go out and do whatever for the money like you did. I believe the same happens in the music industry. Poison is pumped into households worldwide; sacrificing the majority for the benefit of few. The industry chooses who your children will look up to. And I simply believe it’s time we stop being so willing to poison the next generation; for the right price. I’ve sold drugs, I’ve even allowed a woman to sell her body for me in my lifetime. I know what it’s like to sacrifice the well being of others for personal gain. And I refuse to do it again. There is nothing righteous about poisoning your kids to feed my own.” (Bizzle)