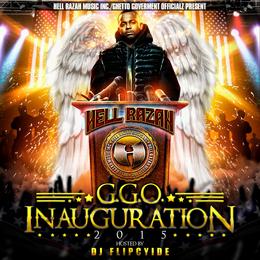 Hot of the Presses “Hell Razah” drops some more fire for your ears. Get ready to get smashed out by the dope 61 Tracks this mixtape contains. Thats right I said 61 Tracks of fire with dope features. Some of the features are “Killah Priest”, “Canibus”, “Talib Kweli”, “Prodigal Sun”, “Buddha Monk”, “Viktor Vaughn”, “Automatik Greatness”, “Lauryn Hill”, “12 O Clock”, “ODB”,  and more. Hell Razah Music, Inc. / Ghetto Govt Officialz present: “GGO Inauguration 2015” as a prelude to the long awaited Hell Razah “El Raziel” album which will be available for download and purchase Easter, 2015. The “TUHH” staff had a chance to play this entire project over the course of two days  and we all found many gems and favorites. There’s Aggresive trakcs and Deep trqacks that make you think like “Adonai”. The features work well together and of course you know  Hell Razah had to put on his Wutang Family and GGO Family on this masterpiece.