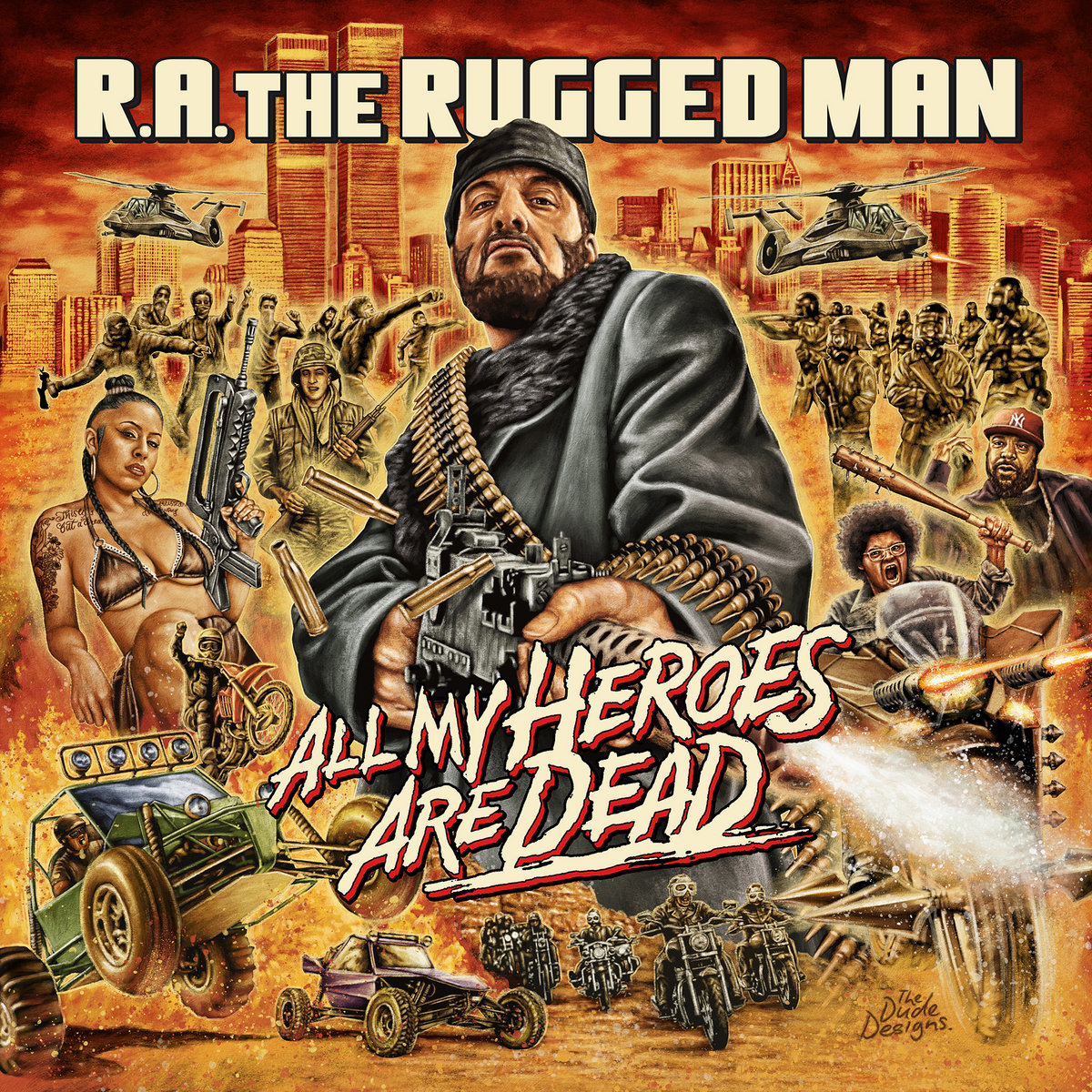 R.A. The Rugged Man – All My Heroes Are Dead (ALBUM)

I took the time to listen and purchase the album. I must say this is dope and it’s feels great to get my daily dose of genuine hip hop. R.A. The Rugged Man has always had great projects and has been creating hip hop music for a very long time. He has heart felt tracks, Raw tracks and Legendary tracks across this album. The posse cuts are awesome and great addition to the boom bap/Hip Hop genre. This is why I am giving ” The All my heroes are Dead” album 5 stars.

R.A. The Rugged Man is one of the most fascinating figures in hip-hop history.  His career spans decades, and defies simple narratives.  The Rugged Man has been an up-and-coming star, an industry outcast banished and forgotten, an underground cult hero, an independent success story, and an influential master of the art form.  He can obliterate rappers with ferocious battle rhymes, craft heartfelt personal songs fans can relate to, offend sensitive listeners with shocking vulgarity, challenge corrupt politicians and corporations, paint pictures with captivating storytelling, and deliver jaw-dropping flows that prove his lyrical skills are unmatched.  He’s also worked with a staggering number of hip-hop’s most respected artists, including legends like The Notorious B.I.G., Wu-Tang, Tech N9ne, Rakim, Mobb Deep, Talib Kweli, Kool G Rap, Public Enemy, Brother Ali, and many more.  And while others struggle to maintain a foothold in the ever-changing rap landscape, R.A. The Rugged Man is the rare artist who has become more relevant with time, with each new album more compelling than the last.

Originally from Long Island’s Suffolk County, R.A. was raised by his father, a Vietnam veteran whose exposure to Agent Orange left two of R.A.’s siblings with severe disabilities.  After building a reputation as one of the most talented unsigned MCs on the scene, he sparked a bidding war between several major labels.  R.A. eventually signed to Jive Records, but his outspoken defiance and reckless behavior spelled the end of that deal and left him banned from venues, labels, and recording studios.  The Rugged Man re-emerged in the late 90s, pioneering the indie rap hustle by pressing up his own 12” singles and contributing to compilations from the celebrated Rawkus Records.  He earned a Gold record for his work on the WWE Aggression album, and his music was featured on the video game Tony Hawk’s Underground, which sold millions of copies.

R.A. then unleashed his seminal independent album Die, Rugged Man, Die, along with the critically acclaimed compilation Legendary Classics.  The latter included show-stealing collaborations and many of the storied tracks that fueled his rise, including the Jedi Mind Tricks song “Uncommon Valor”, on which the Rugged Man delivers what is widely recognized as one of the greatest verses in rap history.  R.A. has also made his mark in journalism and film.  He’s interviewed Academy Award winning filmmakers and world boxing champions for outlets like Complex and Vibe, and worked as a screenwriter and director, notably writing and producing the cult classic Bad Biology.  By the time his last album Legends Never Die debuted at #1 on the Billboard Heatseekers Chart, R.A. was thoroughly established as an independent hip-hop icon, playing sold-out shows across the world and drawing widespread praise for his undeniable contributions to the culture.

Now, R.A. The Rugged Man is back with All My Heroes Are Dead, a brand new album that stands as his best work to date.  “So many of the greats are gone, and the legends who made it out alive are left for dead, like a Golden Era wasteland,” R.A. says.  “Society left our heroes and their culture for dead.  We have to dig that out of its grave and slap them in the face with what we know as greatness, and bring it back with an angry vengeance.”  While Legends Never Die was dedicated to the memory of his father, All My Heroes Are Dead is R.A.’s first album since becoming a father himself.  “When you have children, that’s a whole other level of joy and pain and emotion,” he describes.  “It opens whole entire universes with the pen. And when I’m gone my children will own my catalog, so I can’t deliver anything but the best work for them.”  The music covers a full spectrum of emotions, and transcends hip-hop cliches.  “I didn’t want to make a whole album of just destroying rappers and rapping better than everyone.  That’s easy to me,” the Rugged Man explains.  “There’s a lot of different moods and places my albums take you, and there’s way more storytelling on this album.  I love to bring listeners into different worlds with vivid depictions.”  Set for release in Spring 2020, All My Heroes Are Dead is a powerful statement from an unforgettable artist.  “My legacy is on these records,” R.A. says.  “I’ll be remembered for the work I lay down, and I’m very proud of this one.”