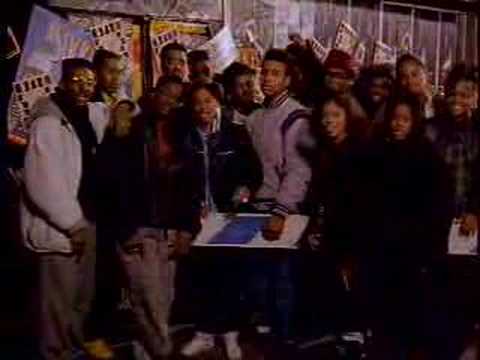 “Self Destruction” seems like a physic telling you about the future. Today in 2015 this song is the truth and still stands tall. A lot of the younger generation still do not understand this real song. Our youth in this new generation have become so ignorant in many ways. We should stand up and make a difference  within our community. Our voices are very powerful if we can learn to unite as one. Now a days it’s all about numbers but we are so quick to hate on one another for no reason. When you look on the news all you see is  race against race but in reality in our communities we are against each other for nothing. It has gotten to the point where we can not even live a happy life with each other,. Once we move into an all white neighborhood our own culture believe we are  selling out. The truth of the matter is that we search for others to become the problem rather then facing ourselves as the real problem. When yu see a mother and daughter twerking or sucking on  cumbers  that’s when you wonder what have we become. My point is things are different because we allow it to turn this way. The people are the voice but this young generation has taking  “Hip Hop” to something stupid.

The Stop the Violence Movement was begun by rapper KRS-One in 1989 in response to violence in the hip hop and African American communities.

In 1988, during a concert by Boogie Down Productions and Public Enemy, a young fan was killed in a fight. The killing occurred shortly after Scott La Rock, a founding member of Boogie Down Productions, was killed in a shooting. KRS-One responded to these tragedies by forming the Stop the Violence Movement, to advance a vision of hip hop that would restore hip hop’s “original principles” to the music industry. Composed of some of the biggest stars in contemporary East Coast hip hop, the movement released a single, “Self Destruction”, in 1989, with all proceeds going to the National Urban League.