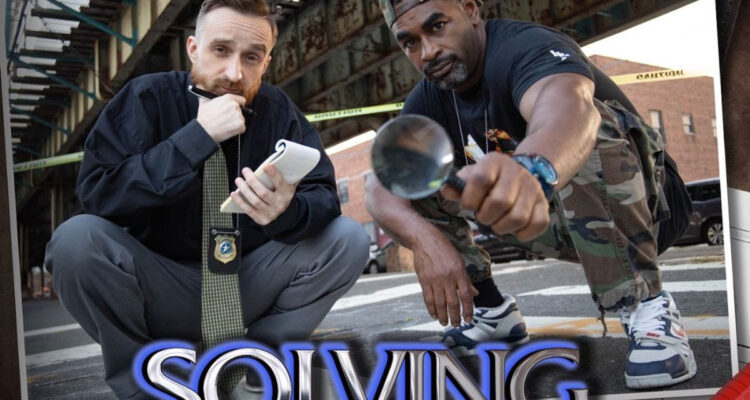 SpaceLAB Recordings in association with Soulspazm Records is proud to unveil Solving Cases – the slow-cooked, long-awaited collaborative LP from New Jersey mainstay & one-half of the legendary Artifacts crew – El Da Sensei, & Brooklyn-by-way-of-Tennessee producer / emcee / engineer Jake Palumbo, whose credits behind the boards include Black Moon, Ras Kass, Smif-N-Wessun & Roc Marciano amongst a lengthy list of others.
The unlikely musical & personal bond began in the studio during the summer of 2014, when Jake was brought in to begin mixing XL – El Da Sensei’s collaborative LP with Sadat X of Brand Nubian which hit retailers summer 2018. Many a long night of mixing sessions would segway into many a long night of smoke sessions, with Jake playing his latest batches of beats for El, who often would write & record to them on the spot. What began as a single collab eventually segwayed into plans for an EP. The workflow & camaraderie in the studio was so painless & fun, it was quickly agreed that the EP should become a full-length.

The two continued working together regularly, with El appearing on the single & video “Gravy Like Gumbo”, off 2017’s Jake It Till You Make It LP. In 2019, Shabaam Sahdeeq featured the “Sensei from NJ” on the “Graffiti The World” single & video, coincidentally rhyming over a Palumbo instrumental. And Jake sat behind the boards once again, mixing the entirety of NoExpiration Date – the long-awaited third Artifacts LP, produced entirely by D.I.T.C. alumni Buckwild. The two also made a memorable appearance together on Tony Touch’s weekly SiriusXM show Toca Tuesdays, with a blazing freestyle session captured on film.

As both men juggled hectic schedules of touring, features & studio work, slowly but surely the Solving Cases LP began to take shape, as El & Jake met up whenever time permitted, continuously decorating the canvas with more sonic spray paint.  It was important to both artists to craft an album that was true & authentic to the sound that has helped El earn his reputation, while also attempting to break new ground musically. Palumbo’s production proudly “sticks out like a sore thumb” as he describes it, & this can be heard throughout the album as traditional boom bap & dusty samples play nicely alongside textural keyboards, 808’s & the trademark bounce & “swang” of Jake’s unshakeable Southern roots. Meanwhile El Da Sensei turns in a lyrical performance that reminds listeners why he hasn’t fallen off once in 25+ years, sounding enthusiastically refreshed on the mic.